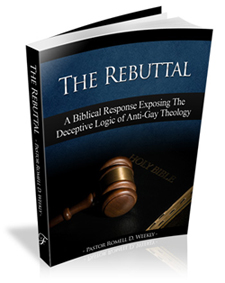 Pastor Romell D. Weekly had a revelation. In 2008, troubled by the anti-gay feeling he saw in the congregation of his Missouri church, and the anti-gay rhetoric he heard from other theologians, he began to do something he hadn't before: to study the Bible in great depth, with cold hard logic and an objective eye. His instinct told him that insisting that he himself read the "clobber" passages in the Bible - those that are used routinely to condemn homosexuality - in their social, historical, theological and literary context, would lead to the truth.

I was raised in a liberal church. The Congregational Church - more formally known as the United Church of Christ (U.C.C.) - was the first to openly welcome and advocate for, the GLBT community, back in the 1970's. Its basic tenets support acceptance and tolerance of ideas. The notion that the Bible would be used to reject, to shame, to exclude, to justify hatred and the denial of dreams and the dissolutions of families, was something foreign to me, and still shakes me to the core when I encounter it. Equally, the anger present in the GLBT community toward Christianity as a whole is disheartening to me: I have never known how to explain, how to prove, how to shout loud enough to be heard over the intensity of fury, that not all churches operate in the same way. And of course, I myself see the bigotry in churches that twist the religion of my youth, and don't know how to confront it intellectually, when their entire theology is built upon hatred, exclusionary thinking, and blind emotion. And so it was with a sigh, a lot of skepticism and a tiny bit of hope, that I sat down at a cafe on Sunday with a large pot of coffee, to dive into The Rebuttal.

But Pastor Weekly surprised me at the first paragraphs, and went on to do it again and again. The new perspective that Weekly's studies had given him, had offered a life-changing choice: placate his congregation, stay quiet, toe the line  - which meant leaving  centuries of misinformation and bigotry unchallenged; or stand up, tell the truth, encourage the changing of minds, and endure the consequences.  He made the braver choice, lost his congregation, and was faced with building a new one from the ground up.

Weekly has gathered his arguments into The Rebuttal: it offers a logical, informed presentation of the arguments that anti-gay "Christians" rely upon to propagate a mythology that caters to - as Weekly describes it - predetermined negative attitudes toward gays. Weekly - all the while maintaining a calm, respectful, informative tone - directly addresses the assertions of six of the most prominent anti-gay theologians of modern Christian scholoarship: Robert Gagnon, Dr. James Dobson, Joe Dallas, Thomas Schmidt, James White, and Jeffrey Niell. His attacks are never personal, they are focused solely on the instability of the argument.

The book begins with an overview of the history of the anti-gay position in terms of Christianity. Weekly focuses on two issues. First, he looks at the tendency of human nature to form an attitude and then interpret scripture to back it up. He discusses the ways in which this has obviously been in play historically and in terms of the modern-day teachings from some Christian groups.  And then - for we history fanatics, the fun really begins - Weekly discusses each of the commonly-quoted passages used to back up bigotry, examines them through a correct historical and social context, and then carefully dismantles each one. He uses a broad view of the history behind each passage - social movements and customs of the era, as well as comparison to like passages - to put specific verses into context. He drives his point home again and again - that not one of the controversial passages stands up to scrutiny as proof of the validity of anti-gay thought, when examined in these contexts. In the case of each passage, he finishes by looking at the writings of the six men listed above and discussing precisely why each argument lacks merit.

Weekly is one of those rare people who reached a frightening turning point in his professional and personal life, and has stood up to the status quo and accepted the personal cost without complaint, his eyes intent on the prize: which in his case is the mission to educate and to recreate a Christianity that is a safe and welcome place for all, regardless of sexual orientation.  The Rebuttal is easily accessible to the casual reader : the language is conversational and non-scholarly, while the material itself is meticulously researched. Arguments are clearly and skilfully presented, and points thoroughly discussed. It is a comfortable, enjoyable, enlightening, and ultimately extremely hopeful read.  It is everything, really, that a rebuttal of this long-standing fallacy should be.

View a trailer for The Rebuttal here.

The Rebuttal can be purchased through Amazon (where it is available in paperback and for Kindle download) and at other retail outlets, or directly from the book's website, from where one can also download a free chapter.

Pastor Romell D. Weekly is the pastor of New Revelation Christian Church, in Saint Louis, Missouri. He is also the founder and president of Judah First Ministries, a non-profit organization committed to advocating truth and justice within the Christian community and society.
Posted by LichenCraig at 9:30 PM