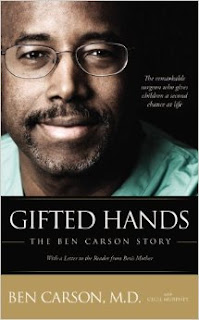 Someone handed me this book this morning, when I asked about it out of curiosity.  I find Dr. Carson fascinating. I remember back when he was, as head of Pediatric Neurosurgery at Johns Hopkins Medical Institutions, invited to be the guest speaker at the National Prayer Breakfast, and effectively and politely - with impressive class and finesse - put a stone-faced Obama in his place like a patient older brother scolding a young upstart.

When he first entered the presidential race, I saw him as a breath of fresh air, and a welcome change from the Washington establishment. Over time, when a few things popped up in mainstream media illustrating some of his weirder comments, I started to feel some caution kick in. I resolved to file the reticence away until later in the campaign, and take a second look if he was still in it. But lately he has surged ahead in the polls, his quiet, intelligent demeanor conveying a calm reassurance that many voters respond to.

I took myself to lunch and read most of the book in that one sitting. I have to confess, I was looking for some evidence that he isn't to be trusted, some sign that he isn't as good as he seems.  Another crazy contender masking as the next superman.  But I didn't find it.

Gifted Hands is a memoir, detailing his beginnings as an underprivileged kid growing up in Detroit. He had the same circumstances as many a black child - and too many of all races - he was living in poverty with a single mom, not asking much of himself or his world, falling into a pattern of violent misbehavior. This is a guy who had no advantages. None. 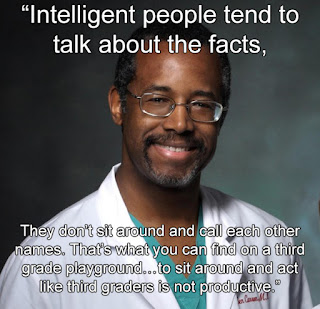 The book reveals how his years through high school found him letting go of anger and violence as a way of life and allowing hope to creep in and inspire him.  It tells how he earned his way into Yale, not as a matter of affirmative action, but by merit of his hard work. It discusses his marriage and the births of his children, and his earning a medical degree and beyond, finding himself rising in one of the most competitive industries and sub-fields in the world.

But the book is so much more than a chronological blow-by-blow of his climb; nor is it merely a

lecture on the ladder to success.  Firstly, it is expertly written. Writers studying the art of memoir would be wise to take a look. The book begins with a critical conversation in the course of his childhood, and is full of stories of his own experience and accounts from within the surgery of some of his cases as a neurosurgeon.

And it's the point of the book that makes it worth a read: while too many very intelligent people get caught up in a pattern of endless self-analysis and world-analysis to the point of constant confusion, Carson has an ability to view the world and life's challenges through a lens of near-childlike simplicity. It has served to form in him a common sense that guides him daily.  The book is peppered with little bits of personal wisdom, that add up to a nice recipe for keeping one's head above water despite diversity and the more unsavory but unavoidable aspects of any lifetime. 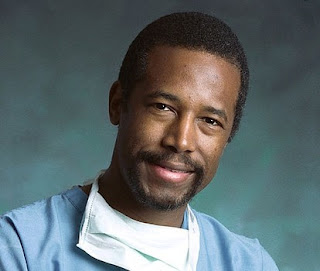 The biggest difference in Carson's life, when compared to similar stories, is that his mother was even more impressive than he is. Uneducated, married at thirteen, she found herself a single mom with two boys when she was hardly an adult herself.  But this is a woman with an extraordinary dose of common sense, and an unshakable commitment to put and keep her boys on the path to success, and more importantly, to living a life of service to others.  The book's dedication to this amazing woman is justified as the reader realizes how the early lessons she imposed shaped the course of a life that might have gone in a very different direction. Perhaps the greatest challenge to such a parent, and one that too many fail at, is the challenge to make a bigger impression on a young mind than does the neighborhood, gangs, and financial circumstances.  This woman accomplished that and more.

Carson credits his mother, and his faith, for his sense of and commitment to right conduct. It's refreshing, in this me-centered society and era of self-obsession, to see any man - much less a presidential candidate - embrace basic ethics that used to be common in this society. His story demonstrates how a life dedicated to those values can benefit the individual as well as those with whom his life comes in contact. It demonstrates why those ethics are still valid and even necessary.

At its core, the book is a spoonful of inspiration, with a realistic take on what can change and make a life. In an ideal world, it would be required reading not only for every black student, but for every teen, regardless of background. It's that good, and that valuable. Interesting, it was written in 1990, when Carson was yet at the height of his medical career, and long before he considered a political one.  It would be fascinating to see what a new memoir, after an additional fifteen years of life experience, would look like.


Posted by LichenCraig at 3:16 PM 0 comments