Hugo Harley on "The Haunting : Into the Woods" 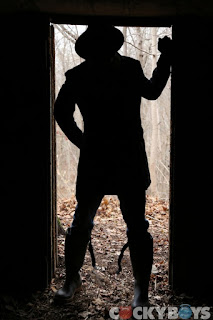 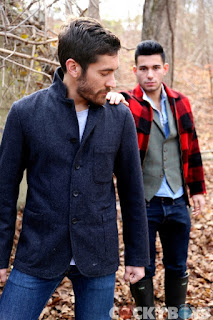 I don’t cry. My tears ducts don’t respond to emotion. I’m a passionate person, yes. But I’m not easily swayed by “mushy” emotions. Due to my upbringing, I have a hard time expressing certain emotions. (I have even been called cold.) I could express anger and disgust, awkwardly feign happiness and recently learned the meaning of ‘sympathy.’ One thing I do NOT do is cry. (It’s just simply not pragmatic.)  Imagine my shock when I saw the final draft of Jake Jaxson’s The Haunting II, and I was crying.  I realized afterward that several things led to this unusual portrayal of emotion:

2. I’m proud. You’re thinking right now, “Don’t you work for Cockyboys? Aren’t you required to sing praises about every scene, no matter what you really think about it?” Yes, I work for CockyBoys. I help produce our scenes and segments. I help do model interviews and coordinate some of the things we need to get our scenes made. I’ve also directed scenes and solos.  But that doesn’t change the fact that in the couple of years that we have been running CockyBoys, it amazes me and makes me DAMN proud of what a group of misfit artists could do. A lot of the emotion came from how wonderful this came out. It made me think, “Yeah… this is CockyBoys bitches….”

3. The bittersweet story. I dug down and realized that I was feeling a longing after watching Haunting II. In some ways, it held a mirror to my own deep seated insecurities, experiences and fantasies. The forbidden love that two of the characters share that was sadly torn apart by bigotry, intolerance and ignorance is similar to the experiences many LGBTQ faced and are continuing to face.  This shook me. However, at the same time, it made me have hope.  And sometimes that’s better than anything. Even after being torn apart, these lovers are finding a way to connect…albeit a few degrees of separation.

So, this weekend, after you’ve watched It’s A Wonderful Life with the family, do yourself a favor, turn off the lights, grab some popcorn and lube and watch CockyBoys’ & Jake Jaxson’s The Haunting Part II: Into the Woods.

NOTE:  Part III of The Haunting is expected to be released this month, and many of us await it with great excitement and anticipation. The trailer for Part I of The Haunting can be found a this link: http://www.cockyboys.com/movietour/trailer.php?id=721
Posted by LichenCraig at 11:23 AM