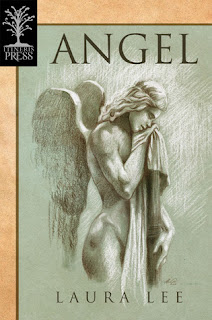 When I first chose Angel to read, I was a little reluctant. Would I be thrown into some massive anti-Christian diatribe? Such things I find are as based upon ignorance and bigotry as is the view of gays from the far right. Both are equally annoying and a waste of time. But I was intrigued by the subject matter, and because any writer had been brave enough to do it - I couldn't resist taking a look. So I forged ahead. I'm glad I did.

Angel is the story of an ordinary church minister who finds himself in an extraordinary situation. A widower who deeply grieves his wife Sara, he is amazed to find himself drawn - first as a minister, and then romantically - to a young male drifter and addict. Their consequential affair, which inevitably comes to the attention of the parishioners of the conservative church, shakes Paul's life up in ways he could never have imagined or foreseen. The romance of the novel is however the superficial story - through it the author bravely delves into much deeper themes, and that is what makes Angel a gem.

Laura Lee is a gifted writer: her use of language ranges from fully capable to at times truly eloquent:

His sexuality wasn't confusing or complicated at all, really. He had fallen in love with Sara, and he fell in love with Ian. Simple. It only became complicated when he tried to fit that reality into the shorthand of official categories. That these labels failed to describe how he felt about himself should not have troubled him much, but so many people had faith in the categories that he was inclined to believe the problem was with himself, and not the check boxes. That was where he became confused.

Lee juggles a number of themes: conservative society's view of homosexuality,  religion and bigotry, bisexuality, and others - without ever muddling up the book. This is not easily done, and is a testament to her skill. The novel is laced with subtleties - metaphorical imagery, expertly-drawn secondary characters, and symbolism. Even the name of the protagonist is an interesting symbol: Paul was the apostle who had perhaps the greatest metamorphosis, the one who struggled the most with personal demons, and a preacher himself.

For me, one mark of sophisticated writing is that it is not simply narrative. Occasionally, the best writers weave in a little personal philosophy, something for the reader to chew on intellectually a bit. Another beautifully-rendered paragraph:


His desire for Ian had the force of an ocean, a tornado, or a mountain. The mountain defies any effort by humans to tame it. You can build at its foot if you like, but when the mudslide comes, you'll be buried regardless of ordinances or zoning laws. None of that exists in the face of nature. Nature has its own order. There is no motive to ascribe to the mountain. It does not kill with vengeance or purpose. It just evolves as it does, and whatever human order we try to create is temporary at best. If sexuality was a force of nature, then wasn't that closer to God than the human laws we try to impose on it?

The most important point that any review of this book needs to make is that it is if anything a courageous work. The author has chosen to write subjects that it may not be politically correct to talk about in many circles. She risked as much backlash from the Left as from the Right.  But she has presented an intelligent, well-considered novel that forces those on either side of the fence to look more closely at the complex issues in our society today.

It is interesting to see how the author handled the world of the everyday life of a church. As someone raised in that world, I found it extremely well-done: realistic and fair.  The author carefully painted a comfortable, comforting atmosphere, so that when it comes crashing down the reader is deeply affected. As a reader, I was somewhat bothered by the book's reluctance to address the reality that there are more liberal churches than the one presented. I felt that a picture was being painted that wasn't fair to all churches, in an era when Christianity is poorly understood to begin with. However, upon more consideration I realized that it is not the business of this book or its story to address all that: this is ultimately a story about one man, one church, one group of believers. It doesn't need to address the wider political reality.

Finally, it should be mentioned that although Angel is a deep read, Lee has a way with humor that makes the book even richer. The San Francisco Chronicle has said of her work, "Lee's dry, humorous tone makes her a charming companion... She has a penchant for wordplay that is irresistible." Witness this passage:

Technical literary points:  The only structural objection I can offer about the book is that the author has placed at the beginning of each chapter a short paragraph or two concerning mountains - their history, their geology, their social significance and therefore their symbolism. I believe that her point was the timelessness and enormity of these structures, as compared to the timelessness and enormity of Nature's truths. I can appreciate that, and I applaud the uniqueness of the attempt as a literary device. However, it often felt very intrusive, and the interruption in the flow of the narrative was by the second half of the book so overwhelming to this reader that I found myself - reluctantly and with some guilt - skipping those passages.

Angel is a unique read, pleasurable from beginning to end, terribly thought-provoking, and above all, brave. Do yourself a favor and pick it up.

Angel is widely available both in paperback and in eBook formats.

Metro Detroit native Laura Lee divides her time equally between writing and producing ballet educational tours with her partner, the artistic director of the Russian National Ballet Foundation. In addition to her novel, Angel, she is the author of more than a dozen non-fiction books with such publishers as Harper Collins, Reader's Digest, Running Press, Broadway Books, Lyons Press and Black Dog and Leventhal. She has also written one collection of poetry (Invited to Sound), and a children's book (A Child's Introduction to Ballet). She brings to her writing a unique background as a radio announcer, improvisational comic and one-time professional mime.