Review: The Cross in the Closet 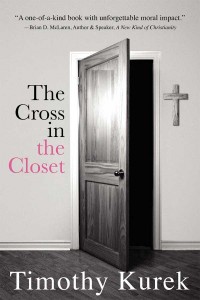 There are some books that, when one finishes the read, one feels lucky to have been exposed to. Within the sea of novels that have this year demanded my attention, a few memoirs have dropped.  As the year draws nearer its close, I will remember Timothy Kurek’s The Cross in the Closet as one that I am most grateful to have read – as much for its quality as a book as for its story. It is a book that demands writing in the margins, taking notes, recording hard-hitting passages for later contemplation. It is a book to be kept permanently on the bookshelf of any person who thinks about what it means to be a human being in a diverse society.

Kurek’s story has become well-known since the release a few weeks ago of this, his first book.  It chronicles his experience of going into the closet for a year – hiding his true identity as a straight man in order to live as a gay man, with all its prejudices and challenges – in order to confront his own bigotry.  The story takes place in Nashville, Tennessee, where Kurek was raised in a Southern Baptist community. Having been raised within, and thoroughly indoctrinated by, a conservative fundamentalist brand of particularly exclusionary Christianity, the decision to live in the skin of his moral enemy for a year was an enormous one, and brave. What is more difficult than looking intently into the mirror at one’s failings?  Early in the year, the author wonders of the months to come:

“...And most important, will I be able to relinquish what I ‘know’ if experience shows me otherwise?”

The book touches upon many smaller themes: the careless cruelty in which any one of us might engage given the right circumstance; the meaning of family; the diversity within the gay community itself, the diversity within the Christian world; the value of true and honest friendship; the real meaning of things like humility and love in the Christian sense; the responsibility of religious institutions to confront their own pasts and hypocrisy and make positive changes for the future.

As a reader, I was surprised by the theme of the book: it turned out to be not at all what I had expected. It discusses the author’s experiences as a “gay” man of course, but it goes well beyond that. The overall theme of the book is his reluctant transformation as a deeply spiritual person whose entire spiritual foundation has collided with a reality he scarcely knew existed.  It is not so much a book about homosexuality as it is a book about bigotry in the wider sense, and about the moral responsibility each of us has to one another, regardless of background, orientation, or religion.

Kurek speaks of the radical decision to conduct his experiment as a sort of calling that simply came to him after seeing first-hand the pain of two friends who came out to friends and family.  His own past, built upon the self-righteous condemnation – in the name of “salvation” – in which so many fundamentalists engage, was something that he was inexplicably becoming less and less comfortable with. He says of the sure moral imperative that had always guided his actions up to that point:

“...what voice was it? Whatever it was speaking to me, I knew it wasn’t guiding me in love, and that could only mean one thing. The voice had to die.”

The reader is invited to be as deeply moved by the portraits of individuals within the GLBT community as Kurek is, as he immerses himself in the gay lifestyle, even adopting a boyfriend (with the man’s knowledge of the experiment and consent), and nurturing enduring friendships.  He finds himself not only surprised by the people he comes to know, but mourning the experiences that fundamentalism has stolen from his life:

“I...drive home in silence, stunned by the gaping holes in my assumptions. I do not just feel ingnorant; I feel cheated, like I have been held back from people that could have spoken hope to me all my life, but I was not allowed to listen just because of their orientation. Tonight, I found friendship. I found comaraderie and kinship. Tonight I found fellowship. Tonight, I found pain and loneliness, but also hope. Tonight, I found a part of myself in a gay bar on Church Street.”

Yet, those hoping to find a total condemnation of religion in Kurek’s book will be disappointed.  Kurek proves himself bigger than that: he finds a thriving faith amongst those in the gay community; he never considers throwing the religion of his youth away completely – even as it so deeply disappoints him – but looks for deeper meaning outside “bricks and mortar” of the physical institution, and for a way to reconcile pieces that he does believe with the new views he has found in his transformation. Once Kurek has become transformed in his views toward the GLBT community, he confronts a new struggle: his growing anger and hatred toward the religious community of his youth. This book is not interested in condemning or stoking anger – it is interested in deeper understanding of human relationships, and in reconciliation.

The most interesting details of the book revolve around how Kurek did it: how he came to make the decision to “go into the straight closet”; how he comes out as a gay man to friends and family; his uncertainty as he confronts the bigotry that is in fact his own heritage; how he experiences a year of the loneliness, despair and isolation that gays experience for a lifetime; how he finally tells everyone who has befriended and trusted him that it was all an experiment.

As a first work of literature, the book shows considerable sophistication. I found it difficult to decide what to include within the confines of this review. Including all the most moving passages would demand pages and pages; I was often moved to tears. Kurek offers prose that is naked and without false pride: as he lays himself bare (such as a gut-wrenching passage in which he describes the guilt he has carried for years, for having - when he himself was a teenager - emotionally tortured a gay man to the point of a stress-induced early death) the reader is stunned by his honesty and by the self-recognition it induces. Throughout the book, Kurek features the voice of his former bigoted "self" as a visible entity - the Pharisee - who is always and annoyingly present to him, taunting him with the comfortable logic of the conservative right of his upbringing even as he struggles to look beyond. The author seems to have a feel for weaving themes, using metaphor to best illustrate and enlighten, and even touches upon a sort of musicality in some passages. I look forward to seeing Kurek develop as a writer, and to future works.

I finished the read with sadness: I found myself hungry for more about Kurek’s journey, and was reluctant to see his year end. I was left with the deep and enduring impression of not only his personal courage but his enormous sensitivity and generosity of heart.  He possesses great insight and an ability to walk into the darkness of his deepest fears in the name of greater understanding – a quality that only the best of us really possesses.

Posted by LichenCraig at 4:23 PM